Koppenberg is located in Belgium. It is 460.4 meters long with an average gradient of 11.6% and a maximum gradient of 19.2%. Find similar hills.

View this hill in the BRENTACOL Toolkit!

The Koppenberg was a constant fixture in the Tour of Flanders until 1987, when Jesper Skibby fell over and had his bike run over by a race vehicle. It was re-cobbled, widened and re-introduced into the race starting in 2002. It's placement in the race is too early to play much of a decisive factor in the race, although it has certainly been known to knock out a contender.

I lived in Ghent for 2 years and had the opportunity climb the Koppenberg several times before it was repaved. For a solo rider, it is fun, but not as ridiculous as it sometimes seems on TV. The biggest danger for falling over is that another rider stops, slows down, or causes you to lose momentum, at which point falling over sideways becomes almost inevitable. And starting again is almost impossible in the steep part, so you'd have to walk. But as long as there are no obstacles and you keep a quick cadence, you can pedal through it without too much trouble. 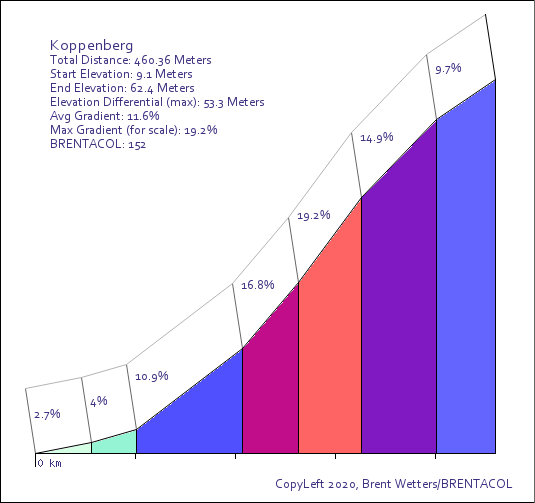